What hath testing wrought?  TW and I attended parents’ night at The Girl’s school on Wednesday.  She’s in the fifth grade this year, which means she’s in a new school.  TB went through that school a few years ago, so we sort of know the drill, but the principal changed since then.  We went, because that’s what we do.


We heard plenty of talk about extra help for math, extra help for reading, discipline, homework, the online system (“edline”) that parents can use to keep up with their kids’ grades, what to have the kids wear for phys ed, the ubiquity of peanut allergies, and even the replacement of carpeting with tile.  What we didn’t hear a single word about, until TW specifically asked, was enrichment.  It was, literally, an afterthought.


What gets measured gets valued.  Schools aren’t judged on their high-achieving students; they’re judged on how many clear the bar of adequacy.  The kids who are likely to succeed are largely left to their own devices.


I don’t begrudge extra help to the kids who need it.  I’d just like some recognition that high-achieving kids have valid needs, too.


By popular demand, the following is TW’s account of the successful conclusion of the Search for Sally:


After spending all weekend in Granby, CT hanging posters/flyers and talking to people, I woke up Monday morning expecting to do more of the same. Then we got an early call that Sally had been seen on Charles Johnson Rd in Southwick, so my plans for the day were turned upside down. Off to Southwick I went, but I had done this wild chase so many times before in the last 2 weeks that I knew not to get my hopes up. By the time I got there, she would be long gone. Still, it was a beautiful day and I told myself to just be peaceful and accept whatever happened.


I met Luann B. on CJ Rd and she had talked to a neighbor who spotted Sally later in the morning on that same street. Luann had set up the trap (cage) in the yard of a vacant house at the end of the road. We were working on the advice of Nicole Asher from Buddha Dog Rescue & Recovery. Luann took off to get 2 rotisserie chickens for the trap, and Nicole told me to just sit and be peaceful and maybe Sally would catch my scent.


It turns out that down the street lived a pet rescuer and she miraculously had bacon (bacon is not a staple in our house, so I'm always surprised when someone has it in theirs). She cooked a pound and we threw pieces on the ground and into the trap with the chicken. I hope I never have use my bare fingers to dig and tear through a hot rotisserie chicken ever again.


Nicole arrived and we split up to hang posters/flyers. Nicole and I returned to the trap mid-afternoon. No Sally. We decided to clear the area and park at the end of the street. No sooner had I left, then Nicole called and whispered that Sally was near the trap at that moment. I couldn't believe it! As Nicole was climbing into her car, Sally had come trotting out from the tree line towards her. As soon as she smelled the bacon and chicken, her nose went to the ground like a magnet.


The triggering mechanism did not work. Sally walked out of the trap.


A few minutes later, she walked back into the trap. The mechanism STILL did not trigger the door! Sally was busy eating the chicken at the back of the cage. Nicole quietly came up from behind and just as she was going to bring her arm down hard on the door to close it, the trigger sprung and the door slammed shut. Nicole called me and told me to come up and get my dog. Tears of joy!!!


Sally was VERY excited to see me! She yipped and barked and wagged her tail. We loaded the cage into my car and took off for the vets'.


Sally lost 5 lbs during the whole ordeal (hey, I did, too, but nobody's making as big a deal over it!). She was so exhausted Monday night and Tuesday, but she is much more herself today. I do feel bad over how skinny she is, and I can tell her muscles are sore because she has a little trouble standing. But she is a survivor and will bounce back quickly.

Was it my decision to peacefully accept whatever the day brought? Was it the fact that a pet rescuer lives on the street and had bacon? Was it a sign when the UPS truck came up the quiet street as I was sitting alone, peacefully, in the sun (Sally HATES the UPS truck and I half-expected to see her chasing it)? Was it a sign that I had told someone earlier, "it's a beautiful day to catch that damn dog"? Did all these things - and more - work together to bring Sally back to us on this particular day? I don't know, but I like to think so. 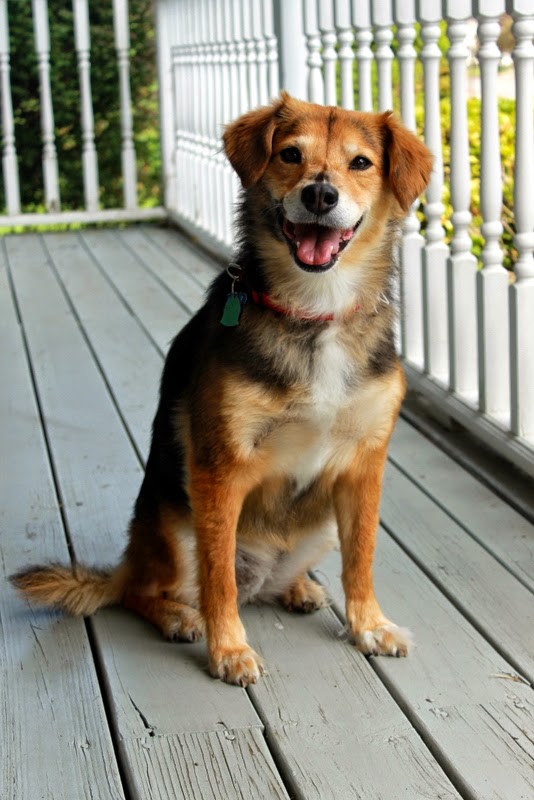 Dean Dad
The cast of recurring characters includes The Wife, The Boy, and The Girl. The Boy is in elementary school. The Girl is in preschool, and queen of all she surveys.